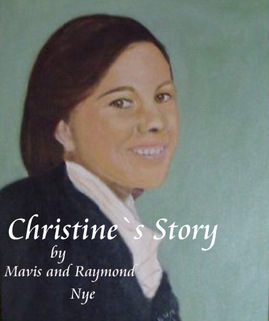 My Painting Of Chris


Update 15 February 2011. I have today finished writing this story. It is an un abridged version of some 17 thousand words. It is a complete account, includes witness statements, solicitors reports Our Baristers Opinion. The inquest. Discussions with the Chief Inspector and  The Hospital. First as an EBook  and also a Paperback.


Christines Story Misadventure or Misjudged . A full unabridged version. 17000 words and 34 pages. Of our nightmare Journey through her Accident and switching of the life support System. A misjudged verdict and 33 years of pain.


Why we should talk about our wishes!

May the 27th 1978 was a wonderful sunny warm day; it was the May Bank holiday
so we were all in the holiday spirit.
My husband, Ray, and I went down town on the bus shopping and the children stayed in the boys were cleaning their bikes.
Our 16 year old daughter, Christine, was waiting for Colin, her soldier boyfriend, to visit. He was coming home on leave.

When we got back from town Christina said she and Colin were going over the road to the school playing field ,to talk, as her brothers were too noisy, and she wanted to sunbathe.
I agreed, and said I would send one of the boys up with their lunch later, so they could all have a picnic.

This area was popular for locals to walk, cycle and play in. She hesitated and said she ought to change but I said “you look wonderful and you are so lovely as you are” and we had a cuddle and off she ran so happy. She did look lovely in her blue jumper which her Nan had knitted for her.

The fish and chip van arrived, and my sons bought their lunch and off they went to meet up with Christina and Colin.
Ray and I were sitting on the settee having a cup of coffee when Tony our eldest son ran in saying, “ mum they have found a body in the field.”
“Don’t be silly” I said but then Terry our youngest came in with a man not in uniform.

We were shocked that this stranger had walked into my home, ”What have you done now” I said, thinking that the boys had rowed with the man’s son and he was going to complain. “Mum this is a policeman.,” said Terry.
“Hello. ,He said , Have you a daughter” he asked – “yes “ I replied, “well please don’t panic but we have found someone in the field” he continued.

I even noticed that there was a bit of rubbish on the floor and picked it up. I have never worked out why I did that.
I was told that the girl and the boy she was with had been taken to the local Hospital.
We rang the hospital straightaway and were told the girl had been sent already to the Brook Hospital.
I knew this meant serious head injuries. We were told to wait, as they had not identified just who they were yet, but we knew who they were.
The policeman also told us they were looking for a man with an axe, as the injuries were so bad. They thought she had been attacked by a mad axe man.

When the policeman left he said if there is anything you want , just ask for me, Chief Inspector Swift. We sat back numb waiting for the phone to ring and hear it say she is OK come and get her, but that call didn’t come.

The call we got was not what we wanted to hear. The surgeons were waitng urgently to operate and wanted our permission.

But they wanted it in person, we said we are miles away and we cant get to you for about 2 hours. so for gods sake go ahead just do what you have to do and we will get to you somehow.

We couldn’t wait any longer, so as we no longer had our own transport we contacted C/I Swift and explained our situation.
The surgeons were waiting for our permission to operate and we needed to be there urgent. They sent a car and driver to take us at high speed to the hospital.

We hurried into the ward and met a nurse who had a pile of clothes in her hand. Do you recognise these ?.“yes,
that’s the blue jumper her Nan had knitted her, yes they are our daughter’s clothes.